Godzilla – Absolute Proof That Hollywood has Run Out of Good Ideas

Back in the mid 1960’s, I played trombone in the country’s first Little League band. As such, we were invited to the Little League World Series in Williamsport, PA. (Not the end of the world, but you can see it from there.) One evening, we went to see “Godzilla vs. King Kong” with the team from Japan. They explained the real “undubbed” meaning of the film and the origin of the creature. That evening began my lifelong fascination with the big lizard and his friends. 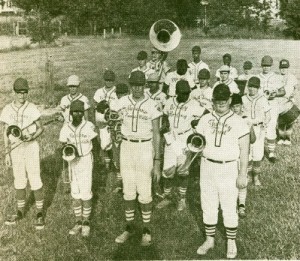 (The Monroe Township, NJ, Little League Band. I’m the kid in front with the trombone.)

Godzilla was supposed to be big business back in 1998. Before the God-awful movie was released, everyone had high hopes for the reimagining of the Kaiju (giant monster).

QVC was poised to be at the forefront of the Godzilla rebirth as was our chief competitor HSN. Both networks brought in a lot of merchandise that reflected the monster’s history since the first movie back in 1954.

I went to the dismal Philadelphia premiere. The theater was one of the few remaining big screen venues in the city. It was on Chestnut Street, west of Broad. Not a great neighborhood at night. Despite the urban squalor there was even a red carpet, although foot traffic had reduced it to kind of a dusty pink hue by the time I arrived.

A local reporter stopped me and asked if I had a favorite Godzilla memory. You should have seen her expression when I said, “Yes. The Jet Jaguar song at the end of Godzilla vs. Megalon.” While she didn’t say it aloud, you could hear her mentally scream “Geek!” a mile away.

When I walked into the theater I saw a complimentary snack buffet. The popcorn looked like it had been popped for the premiere of the 1954 Godzilla film. I saw candy bars that I thought hadn’t been made in decades. For crying out loud, there were Sky Bars! I’m pretty sure their racist ads had doomed them to extinction back in the 1960’s.

I passed on the snacks and an usher in a lab coat escorted me to my seat. Lab coat? Oh, a scientist, I finally got it. My seat was front and center in the massive theater. It was obviously reserved for a VIP as there were fewer cuts in the upholstery than most other seats I passed.

As I sat down, the seat creaked back and locked me at a height that would have been uncomfortable for a 5-year-old. I got up to find another seat and was immediately stopped by another lab coat-wearing usher. She told me that all seats were reserved and that I would have to return to my seat. When I showed her the collapsed seat, she told me to stay put and she would see if there were any other seats available. It was less than 5 minutes before the film and the massive theater was less than 25% full. As soon as she left, I found an empty seat on the other side of the aisle and sat down. She never found me. And this seat had even fewer cuts in the upholstery than my “VIP” seat. And the floor was a lot less sticky.

The movie was dreadful. The awful kid-fare Godzilla films of the 60’s and 70’s were better. The plot was convoluted and the creature looked like something you could buy at the reptile section of PetSmart.

I considered leaving but since I was going to be hosting all of QVC’s Godzilla shows, I figured I should stay to see how it ended. It was a worse ending than The Sopranos, although I was hoping for the on-screen graphic “The End?” which never appeared.

The merchandise shows were interesting. HSN had beaten us to the punch by debuting their Godzilla show at 1 AM Eastern Time. Ours were very successful, most items sold out. Luckily, most merchandise was from the “classic” Godzilla and not much from the new film. When viewers asked me about the new film, I said it “had a good personality.” I couldn’t honestly say it was interesting, since halfway through I was considering committing suicide by poisoning myself with some of the aged complementary snacks.

We had a Godzilla expert (his parents must have been so proud) on the air. The show was featured the two of us waxing poetically about the history of the big lizard. I opened the show with a puppet of the new Godzilla, which we were selling. They opened with a close-up of the puppet as I did my best Don Corleone impression – “I can’t believe you would show me such disrespect. You never even call me God…..zilla. I should have known all along that it was Barzini…..and Rodan.” Hey, most things sold out so I didn’t turn off that many viewers.

Fellow science fiction fan and then “arch rival” John Creamens hosted the HSN shows. I saw a tape of one of them. He did an excellent job, but I think my puppet intro smoked him, lol. John is a respected colleague today.

We did 2 Godzilla merchandise shows on the day the movie opened. Trying to do any more after word got out about how horrible the movie was would have been a really bad idea.

The 2014 Godzilla film is getting some really bad reviews. What did they expect, Citizen Kane? I will still go see it on opening day, but I will bring my own snacks.