B.B. King and the Roomful of Guitars

We had our share of missed opportunities on QVC, especially in the world of music and entertainment. There was the TV star with a line of fashion who refused to make clothes bigger than a size large because, to quote her, “I don’t design tents.” Yeah, her fashion never saw the light of day.

Some missed opportunities were just business problems, i.e., vendors having issues with QVC’s liberal return policy, cost (that was a biggie) or just an overzealous vendor who was concerned about the image of “Televised Shopping.” With most network talk shows devoting airtime to selling various products these days, I don’t think that’s an issue any more.

Failure to reach a satisfactory deal kept Frank Sinatra’s pasta sauce (his mother’s recipe) off the air. It did allow me to have a 2-hour interview with the Chairman of the Board, talking about how the show would proceed. Sadly, QVC and Sinatra’s team couldn’t reach a deal and the project died. The sauce was delicious but did not last long at retail. But I had the opportunity to have a 2-hour conversation with Frank about music, love, life and, oh yeah, pasta sauce.

In the 1990’s we had great success selling music and musical memorabilia. We had everyone from Smokey Robinson to Emerson, Lake and Palmer on the show. Most were really nice people and a lot of fun on-the-air. Smokey was having so much fun during his first appearance, he stayed on-the-air for an entire 3-hour music show, even though he was only supposed to be on for about 20 minutes.

As the resident musician and music geek, I hosted most of the shows. When they told me that there was a possibility of B.B. King appearing, I was ecstatic. I studied B.B.’s music and guitar style for most of my life. He was a major influence on my guitar playing and my love of the blues.

We were going to be selling his tour merchandise, everything from CD sets to clothing. We were even going to sell a leather tour jacket that was beautifully embroidered with his name and a graphic of his guitar, Lucille.

We were just a few days from the show when the vendor wanted me to meet with B.B. No problem, I told them that I would gladly drive into Philly and see him at his hotel. They requested that B.B. meet with me at QVC. Since there was no conference room available that day, I jokingly suggested that we meet at my place, a converted farmhouse in Chester County. They agreed!

I was delighted but I did hire my cleaning people do an extra special cleaning. I even bought a few new lamps and tried to make my place look as homey as possible. As a single man in my 40’s at the time, my place looked a lot like Glenn Quagmire’s home on “Family Guy,” if he had a plaid sofa.

Once my house was ready, I bought of sugar free snacks, (I knew B.B. was diabetic), bought the QVC coffee maker that even ground the fresh beans, and ordered some deli and veggie trays. 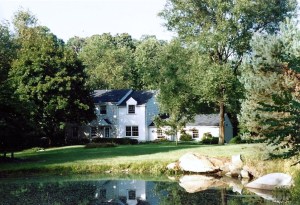 B.B, arrived at my house in the late morning. He was with his manager and limo driver. I invited them all in. B.B. loved the rural area I lived in and, since it was a beautiful Spring day, we took a walk around the wooded lot. I had a one-acre spring and stream fed lake. B.B. asked if I fished in it. I said no but told him that my dentist and his children would often come out and fish for trout and catfish.

We went inside and I was glad I had gotten a large veggie tray in addition to the deli tray. B.B. said he was a vegetarian. My dog Mandy loved everyone and B.B. thought she was great. He asked if he could give her some ham and roast beef from the deli tray. She was in heaven! B.B. laughed when I told him her full name was “A Mandolin Bryant,” Mandy for short.

We started talking about music and B.B. said the people at QVC told him I was a guitar player. I took him upstairs to the humidity-controlled room where I kept my guitar collection. He noted that I might have more guitars than he did. He asked if I knew what was in each case. I told him I did. I told him he could play any of them and he took me up on the offer.

Most of my collection are American-made acoustic guitars. I’ve never heard B.B. play and acoustic but when he did, it was pure B.B. King. He was as quick, clean and tasteful on the acoustic as he was on his beloved Lucille. We even played a few things together. He seemed impressed by my knowledge of his music and the blues in general.

After the impromptu jam, we talked about how the show was going to work. He was fascinated that we would know instantly how many items had sold and how much money the show made. I knew B.B. had lots of children he was supporting, one of the reasons he was still touring almost 300 days a year.

We spent almost 3 hours together and I knew he was going to be one of the best guests we had even had on-air. He even said he wanted to come back to my house and explore more of my guitars the next time he was on QVC. No smart phones in those days, but my memory of the day is just as vivid as any HD video or high-resolution photo. If I had known what was about to happen, I would have grabbed a camera. But I was sure he’d be back and a camera would not be as obtrusive on a second visit.

For reasons that are way above my pay grade, the show was cancelled just a few days before it was scheduled. I heard was that his management team was concerned that TV Shopping was not an image they wanted him to portray, but that story was never confirmed. If he were still alive today, I’m sure that would not have been the case.

It was one of the most special days at my house in Chester Springs. I still listen to his music almost every day. God bless B.B. King!

© 2019 Steve Bryant – No portion of this or any blog can be reproduced or copied and posted on any online site or read aloud on any audio or video media without the express permission of the author.