In the late 1980’s and early 1990’s, QVC was a very innovative company. We sold a lot of products that were fun and truly out of the mainstream. Different styles of sales presentations were often attempted. Some worked, some failed miserably. When something really worked, we refined it and did it again and again, learning new styles and techniques along the way.

One of the many different types of presentations came about when we sold Cabbage Patch Kids. We weren’t selling the mass-produced plastic versions, then made by Hasbro, we had their creator (father), Xavier Roberts, on the air and a complete cabbage patch set he shipped up from his headquarters, “Babyland General Hospital” in Northern Georgia.

The cabbage patch was huge. It consisted of several rows of realistic fake cabbages and measured at least 20 feet long and about 8 feet wide. The cabbages were hinged (I grew up on a farm and never knew this) so that one of the dolls could emerge from the vegetable as it was “born.” While this kind of creeped me out, I also thought it was pretty innovative. 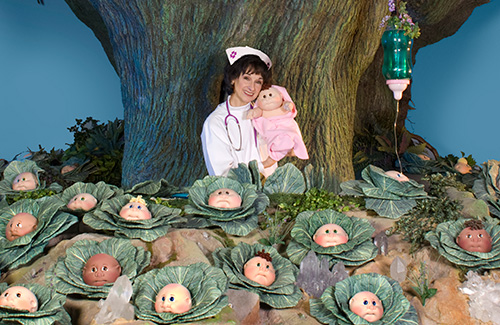 I was chosen to host the presentation because QVC’s original executive team found me to be the most childlike host. Okay, I was flattered and offended at the same time. I met with Xavier, who was charming and gave me the teddy bear featured on this blog. It’s a Furskin, one of his original designs for a new line, dressed in a leather aviator jacket with removable boots. I don’t often take off his footwear; his little bear toes get cold. (Okay, so I might be a little childlike.)

I started the show standing in the cabbage patch. What I didn’t know was Xavier’s assistant, Nurse Nancy, dressed in a white uniform and sporting a stethoscope, was kneeling below a cabbage and pushed out a newborn “Kid” while I was introducing the show. WTF? I don’t know nothin’ about birthin’ no babies!

The newborn had some kind of fake afterbirth on it’s face. It was dry, but looked very real and icky. Nothing like an OCD TV Host trying to assist a cabbage giving birth. “Breathe!” I said, as I mimicked the breathing used for women in labor. “Okay now, push!” With that, Nurse Nancy shoved the doll up. It popped out like a squeezed zit. It was naked…well, as naked as a cloth doll can get. I caught it in mid-air and immediately spanked its little bottom.

I did get in a bit of trouble with some prudish viewers when I looked at the crotch and said, “It’s either a girl or a boy who will have problems establishing a serious relationship when he grows up.”

At this point, Nurse Nancy appeared at my side with a blanket. I wrapped the doll much like I’d wrap a sandwich I was fixing for lunch and joined Xavier who was sitting next to the cabbage patch.

“Congratulations, Steve!” he said. “You are a great cabbage patch obgyn.” Wow. Apparently, it took fewer credentials to become a doctor in North Georgia than it does in many Third World countries. I thanked Xavier and introduced him the viewers. He was a dream guest. He spoke like the Cabbage Patch Kids were real and, when in Rome, I joined in the fantasy.

It was hokey, but a lot of fun. Cabbage Patch kids continued to be born throughout the show and Nurse Nancy brought each one to us. Magically, she knew all their names and didn’t have to examine their genitals, or lack thereof, to determine their gender. Yes, gender was still important back in the early 1990’s.

I think we brought over a dozen new “people of cloth” into the world during the presentation. The show did major dollars. Xavier appeared again but the sales numbers never equaled our original show. I’m pretty sure that was due to the “serious doll collectors” who insisted in hosting all future shows. My sarcasm and humor made the first program a lot of fun. Even Xavier joined in the silliness. We never made fun of the product but never lost sight of the fact that we were adults playing make believe. Xavier had a marvelous sense of humor.

The future show hosts never really engaged with the fantasy element and almost disdained it in the attempt to make it a serious collectible show. It’s hunks of cloth popping out of fake cabbages! What the hell is serious about that? At least the company wised up by the time Kirk’s Folly started airing. I’m still finding “fairy dust” in some pockets of old sport coats.

Fun, sarcasm and whimsy are missing elements from most TV Shopping Shows these days. There are a few exceptions. Evine Live used to do some innovative programming that made some of their shows fun and entertaining. Sadly, that’s a thing of the past with the new management. Adam Freeman on HSN also uses his natural humor and wit to make his shows enjoyable. I’m sure his sales numbers reflect that. QVC host Jennifer Coffey has established a wonderful on-air rapport with designer Isaac Mizrahi. Her regular shows with him are interesting and entertaining while never losing focus. Again, the fact that this pairing has lasted for years shows that the upbeat style of the show really lights up the phones.

Bottom line – Make a sales presentation different and better. It works! And you just might learn some serious midwife skills.

© 2018 Steve Bryant – No portion of this or any blog can be reproduced or copied and posted on any online site or read aloud on any audio or video media without the express permission of the author.